Pillar 2: How To Learn Spanish Grammar

Grammar, on the other hand, presents itself as a rigid set of rules that never change. Therefore, students are forced to simply learn them, and there are few ways to work around this reality. Fortunately, however, while students can’t avoid learning grammar– they can certainly change the way that they approach it.

How to learn Spanish grammar 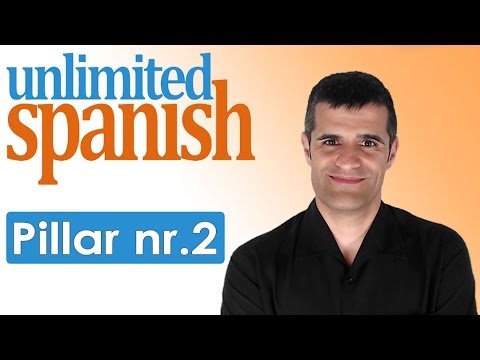 Spanish grammar is, as mentioned above, a set of rules. These rules are designed to help non-Spanish speakers learn the language, and include concepts such as prepositions; tenses; the subjunctive and so forth. Grammar is incredibly important, particularly for English speakers learning Spanish, because the structural foundations of both languages vary so widely.

However, while grammar is the basis to all languages, it shouldn’t necessarily act as the basis to learning a new language. Grammar rules are difficult and confusing. Students who focus on learning the grammar, as opposed to learning the language, may find themselves unable to speak fluently even after years of instruction. For this reason, it’s recommended that students simply do not study grammar rules.

While this may seem counterintuitive, it’s actually an incredibly effective way to approach a new language, and disregarding grammar will actually help students push past their fear of learning something new. While grammar should still be valued, it shouldn’t play an integral role in the learning process. Instead, student focus on treating Spanish as they treat English or their first language. This means that as opposed to considering rules or structure, they should automatize the language, and approach it as a habit instead of a challenge.

This isn’t to say that grammar should be dismissed entirely, however, particularly for those looking to improve their writing skills. It should, instead, be sidelined until students gain a firm and natural understanding of Spanish. Once a solid foundation is created, learners can then learn Spanish grammar (slowly) into their lessons. This can be done through a particularly effective technique, named ‘The Point Of View Mini Story’.

The POV Mini Story consists of students reading the same story from different grammatical points of view. This means that the same story, with the same plot, is told in both future and past tense. This is an excellent way to compare the differences in tenses, and to note how the story itself is affected by a change in tense. This exercise can be carried out with singular, plural, first using traditional rules.

While grammar is important, and will always play an essential role in modern languages- it’s not necessary, particularly in the early stages of learning a language. For this reason, those looking to learn Spanish grammar should first avoid doing so; and later incorporate the Point Of View Mini Story technique into their lessons.

Pillar 1: How to learn Spanish vocabulary

And the most important part is speaking practice with the listen & answer method. We highly recommend you to use these powerful lessons to learn speaking Spanish effortlessly.

Thanks for supporting us by sharing this :)